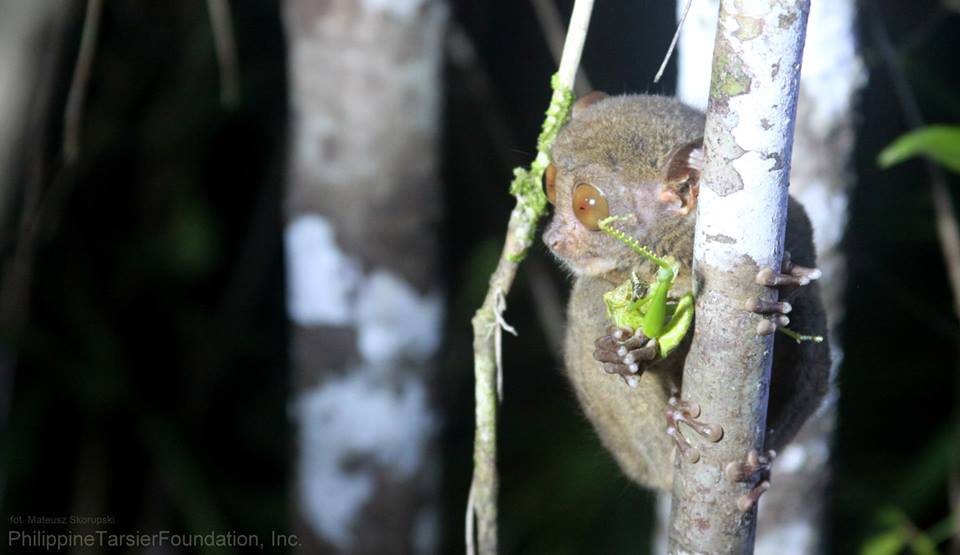 Spearheading the campaign to save the Philippine tarsier is the Philippine Tarsier Foundation, a nonstock, nonprofit organization based in Tagbilaran City, the capital of Bohol. It is an entirely private sector initiative, but enjoys strong support from the country’s two lead government agencies for environmental conservation and ecotourism, namely the Department of Environment and Natural Resources (DENR) and the Department of Tourism (DOT).

The Foundation’s beginnings can be traced to a visit to Bohol by Mr. Jesus Alvarez Jr., former director of the Philippine Parks and Wildlife Bureau, in 1996 on the invitation of local connected citizens. One of the country’s pioneers in nature conservancy field who was primarily instrumental in bringing the plight of endangered Philippine eagle to International attention, Alvarez immediately saw the need for a more organized effort to halt the continuing decline of indigenous tarsier population.

Following the visit, he proposed an initial program of work in that direction wit the following major recommendations.

Establish a body to assume overall responsibility for the whole drive,
Define the parameters of the effort and the role the said body would play therein,
Move for the declaration of the Philippine tarsier as an especially protected species by the President of the republic,

Identify an appropriate site for the designation as a sanctuary for the species. Alvarez also specified four main areas of activity that the organization to be set up would concentrate on: habitat management and protection; community organization and management; research on ecology and biology of the tarsier; and ecotourism.

Accordingly, on April 17, 1996, the Philippine Tarsier Foundation Inc. was registered with the Philippine Securities and Exchange Commission, with the following prominent Bohol residents listed as incorporators: the Rev. Fr. Florante S. Camacho, SVD, (former) president of the Divine Word College (now Holy Name University); Anos Fonacier, municipal councilor and resort operator; and Col. (Ret.) Zosimo Angan, businessman. They were later joined by Richard Uy, banker, and Marlito Uy, department store owner. Elected principal officers were Fonacier as Chairman; Camacho as president; and Alvarez, who is the only Boholano on board, as executive vice-president.

On November 4, 1996, the Foundation transmitted a formal request to the DENR for the preparation and conclusion for a memorandum of agreement charging the Foundation with implementation of the Philippine Tarsier Conservation Program. Five months later, on April 1, 1997, in recognition of her keen interest in environmental concerns throughout the country, the Foundation invited Tourism Secretary Mina T. Gabor so serve as its honorary chairperson, in which capacity she now functions.

Currently, the Philippine Tarsier Foundation maintains offices both in Tagbilaran and in Metro Manila, which are accessible via postal service, international direct dial telephone/facsimile, and e-mail. Before the end of the year, it will have launched a Philippine Tarsier website in the Internet to provide interested parties with comprehensive and up- to- date information on the species activities being undertaken in its behalf. 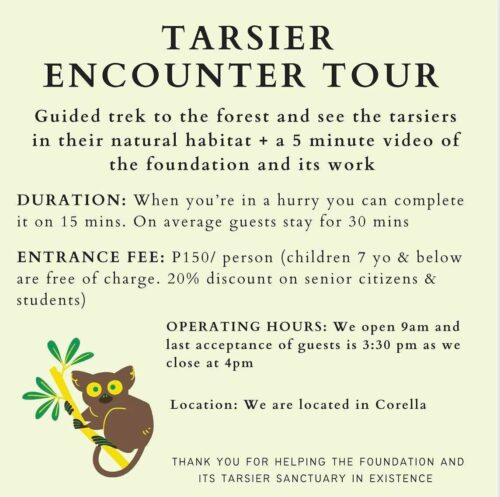 Meanwhile, ongoing in Bohol is an individual and corporate membership campaign aimed at allowing as many local residents as possible to actively support and participate in the Philippine Tarsier Conservation Program and the work of the Foundation. This is in firm belief that no undertaking of such nature can flourish without a strong community base.

Subsequently, the campaign will be extended to the rest of the country and abroad, with environmentally involved or aware institutions, agencies, companies and persons foremost in mind.

While for the moment the Foundation is focusing its efforts on Bohol, it hopes eventually to link up with groups similarly engaged in nature conservancy elsewhere in the Philippines, with whom it may jointly develop projects and rare fauna and flora species, and their natural habitats.