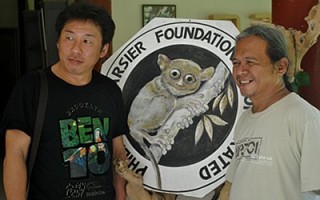 Carlito Pizarras used to hunt tarsiers for his father, who was a taxidermist. The tiny primates could be found on trees around the village. Of all the animals his father stuffed and sold, tarsiers were the bestsellers. His father was paid P250 for each tarsier.

When he was 12, he decided to take care of one and learn more about their eating and mating habits as he watched them inthe wild. But he also noticed their dwindling number due to hunting and slash-and-burn farm of their habitat.

“Many told me that it’s hard to breed tarsiers so I took it as a challenge,” said Lito who tended to his tarsiers 24 hours a day. Everyday, Lito, together with his wife and three kids, catches crickets, beetles, termites, lizards, small fishes, young birds and frogs which he feeds to the tarsiers. Ten to 12 grams of food are consumed in a single day double that amount by a pregnant female . In spite of their aversion to captivity, he was able to bred dozens of the Philippine tarsier (Tarsius Syrichta). As soon as they matured, he’d release them into the forest. This is how he earned the title “ tarsier man”.

Many groups broached the idea of putting up a tarsier foundation to Lito. He was willing to help all of them but only the Philippine Tarsier Foundation (PTFI), a nonstock, nonprofit organization based in Tagbilaran City, Bohol which enjoys support from the Department of Environment and Natural Resources and the Department of Tourism materialized.

“Lito (Pizarras) was instrument in setting up our conservation program. Although the foundation has not done much in breeding the world’s smalllest monkey, it has been active since 1997 in its media campaign which has helped offset its mortality rate,” said Danny Nazareno, manager of PTFI.

The difficulty of breeding tarsiers, Nazareno says, is due to the following factors: The female gives birth to only one young after six months. Those taken in captivity seldom survive or reach full maturity. Fifty years of attempts to breed the species under controlled conditions locally and abroad have thus far met with very little success. Yet unenlightened foreign tourists and collectors have persisted in smuggling them home as pets.

But help is finally underway to protect and revive this unique living treasure. After working for 30 years with the animal, Lito is now the field officer of the PTFI, which has established a research center and a protected breeding area. When England’s Prince Charles visited Manila in 1997, Lito made a symbolic presentation of a pair of tarsiers to his Royal Highness at Malacañang Palace.